Damselles was first published in an article about The Wild Men of Paris : Matisse, Picasso and Les Fauves.
Fauves meaning wild beast, was a handy term to differentiate use of colour, from that of the impressionists fascination with light ; the Fauves used colour in saturated blocks, rather than smaller marks, but equally representation was not literal.

Dance (1) specifically shows the essence of the original’s overall lightness and joy.

Stand back a minute and think of how this is conveyed. Firstly, if the bodies were rendered as literal, in a painting of a dance like this; the movement would be of the mechanics of a group of people dancing – yes some maybe in the air mid movement, but the mechanics of the positions in relation to each other’s time-held movement would be the only way to mimic the real-life scenario. 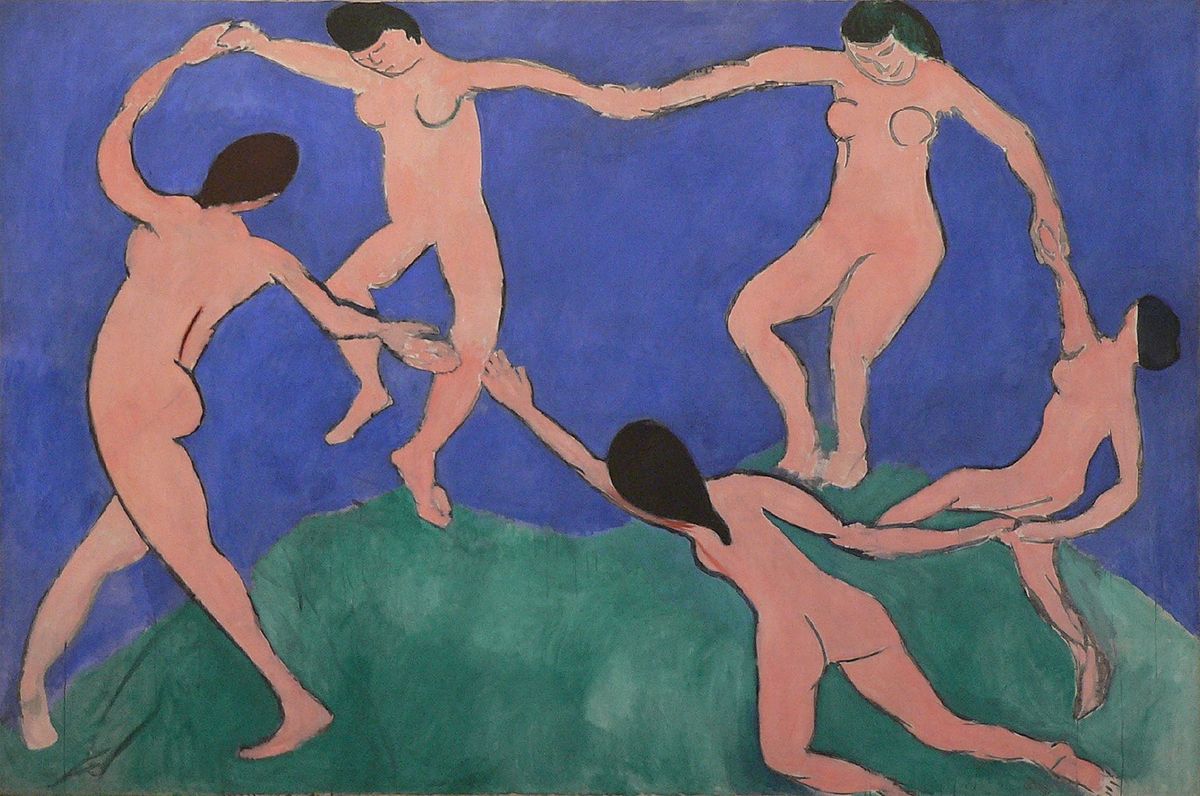 As with Picasso and Damselles. Matisse takes the mechanics of reality out if this. He directly uses colour and the flatness of the canvas, away from a true sense of perspective.
The impressionists had also been doing this, depicting how they saw light rather than solidity of object. Now Matisse saw form through colour arrangement, as a way of expressing an emotion or feel of something.

The colours used are simple and easy to relate to. We could assume the background is green for grass or blue for sky or water. Either way there is no way of knowing for sure as there are insufficient details.
Only the dancers have the necessary detail to invoke a feeling. And that feeling is subjective to the viewer. But the simplicity and essence of movement and freeness in their abandon, with nude bodies, relaxed lines and lack of tension is shown in their lightness of touch with the perceived ground and the space they occupy on the canvas and as a group.

There is a break in the chain, this could be a point of tension, but the colour of a knee fills that, possibly. The break could mean all sorts, an offer for the viewer to join ( it is closest to the viewer’s stand point).
Or a gentle slip; in that a break doesn’t matter in the great scheme of the dance itself.  But it doesn’t detract from the overall unity of the group and feeling of a perfect moment.

All conveyed through a different way of using colour, form and arrangement to express an idea of reality.