No cow’s (or artists) were hurt in the making of this exhibition :

This, by Biennale standards was a large exhibition. And by Biennale standards a move away from the more ‘equal space for all’ approach initiated all those years ago. Its Giardini pavilions designated for each participating country and designed individually, largely on an equal footing, size-wise with each neighbour.

Treasures from the Wreck of the Unbelievable, taking years to make, ten precicely, certainly needed the space of The Pinault Foundation’s two buildings the Punta della Dogana and Palazzo Grassi.

Aside from the work itself, it did appear to slightly overshadow the main event, by its size and the artist’s reputation. The main event being held as always in the Arsenale and Giardini. And various venues dotted around Venice.

First of all, the space. I saw Dahn Vo’s exhibition at the Punta della Dogana in 2015 and one thing I noticed was, how easy it was to move around the building; being able to view larger rooms from above and all with plenty of natural light. All, apart from one room (in this case used to great effect with lights dimmed for the gold and crystals). 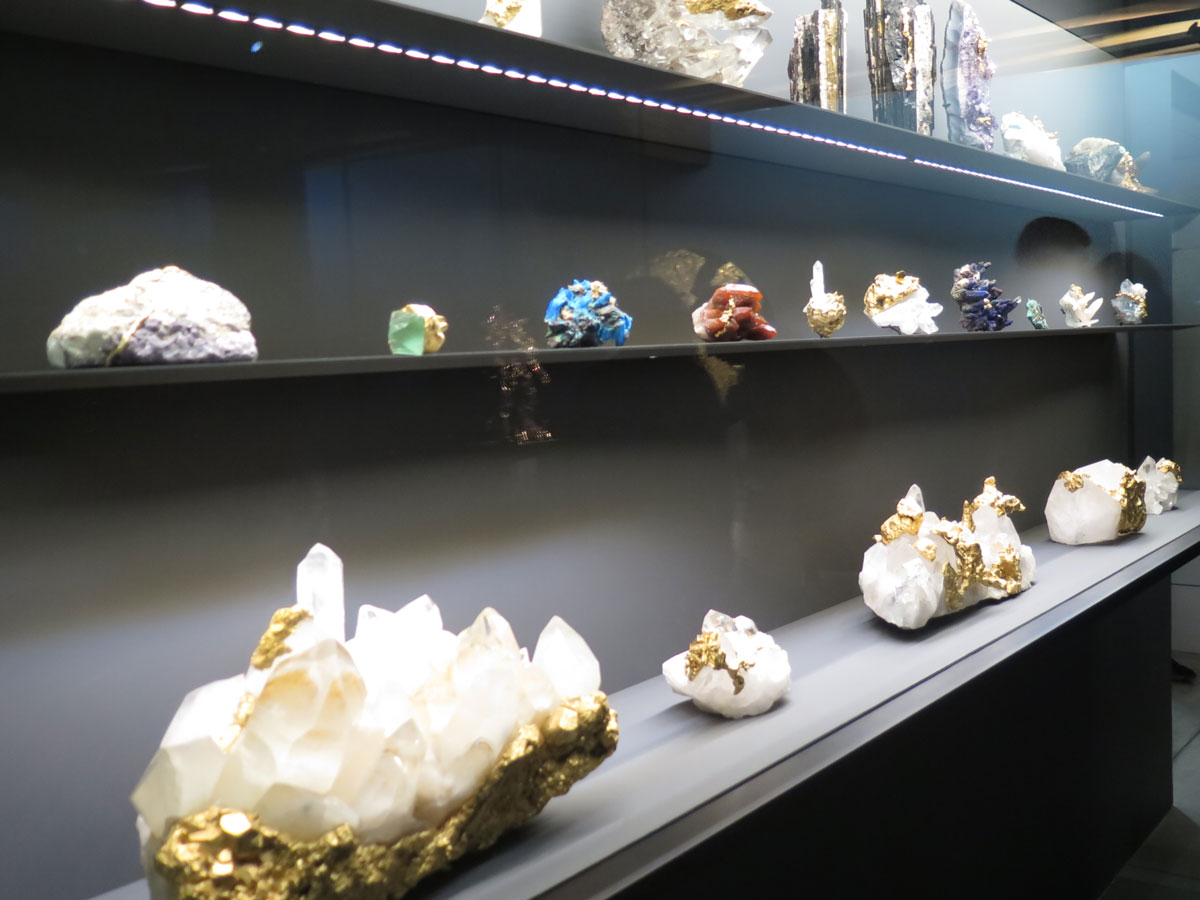 I had read some reviews of the exhibition before I saw the sculptures in this part of the two spaces. The Dogana (Customs House) housing the wreck’s treasures and the Palazzo Grassi re-inventing these as expensive collectible items.
I didn’t get to see the second part in the Palazzo Grassi – all the drawings, and re-models of the broken and tarnished objects laid out in the first.
Or the huge sculpture,  a gigantic re-model of a smaller object housed in the Dogana. Which Hirst based on Blake’s Ghost of a Flea. I imagine this, the larger sculpture 18 metres high, with dimensions similar to Colossus of Rhodes 33 metres, to be the most obvious jewel in the crown of The Wrecks crowd-inducing benefits.

So a good space for the first part. And for so much.

And, just like visiting the ordered and complex nuances of a museum it left me feeling slightly stir crazy after an hour in the building.
I almost felt nauseous, at the abundance of garishly beautiful, faded colours of fantastical corals fastened to the sculptures. And with the Mediterranean blue of giant photo stills depicting a far from ‘deep water’ recovery of these would-be historically endorsed artifacts from 2000 years ago. After an hour persevering with the detail, they all seemed to blur into a mass. A fantastical, grotesque, barnacled discovery, from epic proportions to the minutiae. The smoothed powder-white and slightly distressed sculptures, revealing some ancient form of photoshopped beauty. Only to be confirmed when I later realize the model for Aten was Rihanna and The Pharaoh, Pharrell Williams. All very contemporary.

I thought the idea of recovered historical artefacts from a wrecked ship fascinating. Based on a legend, centered around roman slave Cif Amotan II and his reversed fortunes, his name an anagram for ‘I am a fiction’.
With this concept underpinning, a question about the basis of historical fact was introduced but also invited doubt into the exhibition’s origins, a doubt that would subsequently permeate through every image and piece.
But the ship especially, named Apistos or Unbelievable, a brilliant twist, as the meaning of the word Apistos is more akin to lack of, or loss of belief. And with belief historically being a glue of sorts, that all society would look to, this has now shifted away from the centuries-old traditions of belief, of empires, and god(s) of religious focus, to more contemporary obsessions, with money, fame, status and power.
Not least because the whole idea was given a plausible gravitas and believability by the sheer size and documentation of the collection.
You had to believe (or honour its presence as art) as there was just so much ‘evidence’.
To find any anomalies led to a sort of Where’s Wally hunt for truth.
And as in a museum the walk around led to consuming more and more of this historical novelty. Like I said I began to feel a little bit nauseous.

But it worked.
I didn’t like it, say, as a piece of art that would hold my attention in an aesthetic way through the forms, shapes or colours, whether I thought them beautiful or not.
It seemed all about (manufactured) recovered artefacts, an idea. Which was obvious, but unbelievable, a story. In parts beautiful, as in beautifully made. Intricately re-incarnated as expertly as any historical restoration. And because of the idea of unbelievability, the grotesque and uneasy elements could hold that attention (a little like the fairy tale attention grab of Koon’s Cicciolina Made in Heaven).

From the contents of the ship; everyday objects, old deities of worship, aesthetics of human form and differing states of societal ‘discomfort’, like slavery, rape or bacchanalian pleasure, they created an uneasy voyeurism. I drew parallels about believability in general. That and status, ‘worship’ and worth. How we consume uncomfortable facts, and how this unease and discomfort can be anesthetized into the everyday through onslaught and repetition. The way institutions have been formed over time and how facts are assimilated.
Also whether these unbelievable facts and subsequently re-modelled objects shown in this immense collection has relevance to art, the art of Damian Hirst, or the market he supplies, is an interesting thought.

Overall for me, this half of the exhibition was good, by its sheer audacious and all-consuming attitude. It is toying with ideas that bolster itself; neither fake nor real, it puts itself outside of that, with parallels to art’s worth, art making and collecting.
An idea of the unbelievable made believable, displayed with gravitas and made to be disbelieved. Fantastical in its conception, though at the same time more than a little bit tedious to consume.

And stating the obvious here, this is not something a new kid on the block could achieve in either time, money or scale. From this point he has used his own status as artist well.

Whether his naysayers like it or not, only Damian Hirst could have done this, in this way on this scale. His reputation and his art stepped up to this.
The jokey element just enough to cause a stir in the arena of the art world’s high-end comfort zone, without affecting its real-time collectability either I imagine.