I am a great believer in the idea that truly original works of art do occasionally happen but for the most part it is someone unwittingly doing something slightly different from another work that has already been done – a bit like music, the notes are there but eventually something will sound a little like another piece.

And on the same note (pardon the pun) considering the scope of the notes and the scope of creativity in general it is any wonder repetition doesn’t happen more often.

So I was not surprised when I heard that two British artists Patrick Waterhouse and Walter Hutton were embarking on a re-imaging of Dante’s Inferno (part of the allegorical trilogy The Divine Comedy).

Take time to watch this though – ‘cos they are doing something pretty daunting and the ideas they are expressing here are captivating in a mini sound-bite-tv-ad kind of way.

Artists contriving to do what many would regard as blatant plagiarism? – well there’s nothing new there and nothing like a bit of preservation-angry detractors to up your ante.

Or Artists just showing themselves to be expressing a new and innovative way of *art as reinvented new*. Certainly commendable and no doubt the results will be interesting.

But then the idea seemed to go a wee bit off the beaten track when I also heard this was not their own venture but a kind-of-commissioned piece by those masters of advertising (who leave the Saatchi’s in the cold) Benetton.

The Benetton of babies in cocktail glasses and men dying from aids billboard fame. The Clothes Manufacturer and although the adverts at the time hit the shock horror we-need-to-talk-about-issues zeitgeist and very commendable for that – it always struck me as a tiddy bit tacky to use images in this way to essentially promote your sales – of clothes – not an aids related drugs campaign in Africa, say, but clothes being bought by mainly middle class Europeans with an aren’t we being edgy feel-good factor to it.

And it is true when hired photographer Toscani pushed his imagery to the max and upset a fair few people with a death row billboard the company did start to reflect on actual hands on rhetoric.

So, along side the ad-campaigns they joined up with The World Food Program and Micro Credit, all organisations with good intentions at heart. This though was still advertising and Ok, at least it was *raising awareness* and I’m not sure if any profits were re-directed but hey! they are not the only company on that tack and lets face it some are no where near making the kind of effort as shown on their recent campaigns; Benetton may have a track record for shocking adverts but it is still a long way off from many clothing manufacturers ducking and diving over human rights and ethical issues.

So what was it this time?. Benetton has been pretty consistent since the mid 60’s – fledgling company it is not. And you still have the green United Colours logo reverberating around the high streets. Along with the green logo Benetton Formula 1 zooming round the tracks.

Dante was pretty unique with this epic poetic piece of work and the name probably rings a bell somewhere in everyone’s collective psyche. A bit like St Paul’s letter to the Corinthians – no one really knows what was in it exactly, but we all know he wrote something.

So what is the point with this work of art/book advert in the making? Someone somewhere obviously thinks it is a good idea – advertising is not a whimsical thing in any company – the button counters are first in line to stop any unnecessary money and risk in promotion. And this *project* has money backing its production.

But there is no risk? certainly not like during the affluent 90’s-2000’s trail blazers of Toscani ‘s before it.

The ingredients are on the face of it, two relatively unknown UK artists re-working Dante, an (Italian) national icon, who most people possibly don’t know enough about to actually get affronted by the potential sacrilege, never mind understanding the re-worked concept. And a post-economic meltdown clothes company giving a pre-advert sound bite.

One thing seems fairly certain this is a commission and how much say-so the artists actually have in their brief may be debatable.

No matter how interesting and possibly even good the finished work may be, even by literally doing-it-again-differently.

No matter how much the voice of reason (Benetton) suggests (I suspect) that its intention is to *re-awaken an interest in Dante’s work* (which is very applaudable) or even an interest in the artists? Especially if we can easily see the original work as well to get the intended meaning.

Gustave Dore’s Engravings in The Divine Comedy : Dante lost in Canto 1 of The Inferno

This was a huge work of words and engravings and has been depicted in many dissected parts, in paint and drawing, by many artists. How this will work in 2010 – it does sound a fascinating endeavour. It is just the format of procedure that seems a wee bit off.

Delacroix : The Barque of Dante

I’m thinking about all the detractors of William Orbit’s Adagio for Strings here. Which as a piece of done-again-differently music worked really well, I thought. Especially as the original was so well known, a sound track to almost everything. And although purists rallied to the cry of sacrilege! he I am guessing, had a bit more freedom to create the piece artistically even within the framework of commercial music, as it was produced in the main as music for music’s sake.

This though seems not to be a wholly creative re-work of the poem’s imagery, possibly a measured attempt at re-inventing it: Artists who are already involved with Benetton’s Fabrica Centre then *decide* to do the piece and Fabrica fund it.

If not engineered, it seems a contrived work? to maximise profits by the clothing company’s specially formulated publicity arm or Communications Research Centre, Fabrica, who are primarily? interested in selling as many clothes off the back of the interest in the ad campaign as possible in order to satisfy share holders.

If so, this is art being used for clothes–horse sake. No matter how minimal the Benetton/Fabrica logo appears in a corner somewhere.

Or maybe I am wrong – she says hopefully:

A manufacturer who (like many are today) desperate to increase sales, decides sod it! dammed if we do dammed if we don’t so, we are interested in expanding artistic and social perspectives.

Somehow though, this time round the idea of it all just doesn’t seem risky or edgy enough.

I was looking at the Gaping Void‘s shiny new site and noticed his drawing of the Wolf, with the text rendering the idea; think carefully before you decide to be a sheep or a wolf – you can never be lonely as a sheep but you can (stick your head above the parapet) and be a very lonely wolf.

And as a reflection of this hashtag month was prompted, by it has to be said those real stalwarts of the event, Jennifer and William, this particular cartoon came to mind.

I did email Mr Void (MacCloud) to ask if ok to use the image, but hopefully this will suffice. 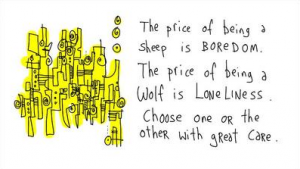 All through the last months to-ings and fro-ings I had noticed the lack of lonely stances. Yes, people agreed to disagree but I believed this was a good thing because it represented, for me, a more rounded debate that was neither sheep led nor had lonely wolves on the peripheries. If anything the debate itself was sticking its head above the parapet inviting disparate sections of the art market and art world to engage.

At first glance as the project’s early discussions streamed from the blog I picked up on the energy that was coming over. So with eyelids sometimes drooping (the UK/US clock thing) I determinedly boarded the train that was to become hashtag class.

This evolved into a rich, sometimes strident, sometimes resolute, but more often than not insightful rapport into the investment of the future of art. It was definitely more than the sum of its parts. And with those kinds of maths, exponential may well be a word to describe the (inevitable) growth of what seems to be a fresh approach to thinking and doing the business of art.

First off for me; thinking of ways locally and through local art groups, schools and social media to bring people to the table with this (and ongoing?) #class project(s) as a central reference point. To try and expel, or at least discuss the mind set of us and them.

But I also had a reflection of my own from an experience a few years ago when an ongoing discussion group was set up at the Design and Textile Museum (London) to address organic and fair trade cotton products and the fashion industry as a whole. Though not the same as the hashtag class maybe has some sort of relevance.

Apart from the bigwig designers and groups for and against (action for this, and action for that), one of the groups that became most involved were the fashion education people (and surprisingly, Central St Martin’s and London College of Art who, I thought at the time wouldn’t want to rock their high ranking safe-status by projecting ethically sound students onto a reluctant industry).

But they found that area ripe for their students who, on leaving college would find, with the best will in the world, the practicalities of setting up with this kind of ethos in mind almost impossible as the infrastructure; lack of factories producing, and guarantees of the process from beginning to end being totally organic and fair trade was just not there.

The designers who got involved in that project were Katherine Hamnett (who had sold off her existing business, bought and set up a farm and factory in India to guarantee the process from beginning to end) and Roland Mouret, who hadn’t : ) and all credit to him for engaging on that basis alone.

But more than anything it was so good how the fashion colleges really took to the debate.


Here’s an extract from the ecologist magazine in 2008

Schools
The future of fashion lies in the hands of the next generation of industry players: fashion and textiles students. Increasingly, undergrad and postgrad courses across the board, from Textiles Design to Retail Buying to Fashion Marketing, are tackling ethical and environmental issues, and more students are incorporating these into their work.

Fashioning an Ethical Industry (FEI), a Labour Behind the Label project, has compiled a database of eco/ethical elements in fashion courses in the UK: visit http://fashioninganethicalindustry.org/ethicalcourses
Courses with ethics and sustainability at their core:

A non for profit organisation originally focused in London, this debate has been taken around the UK with European Union backing.

Its fashion; no it’s not the same as art, and it has as a fairly substantially backed but fledgling not for profit organisation had to well and truly stick its head above the parapet in the face of a very defensive fashion industry – equally defensive with the recession.

But the idea, that an idea or change in mind set can be agreed and reached through debates, shows I think, that the old guard force feeding of ideas and ideologies doesn’t necessarily have to be.

Show an idea to work while including people (no mean feat!), debate it and the rest will follow.